It’s easy to think in simple terms about volume – turn it up to hear better… or turn it down to make it more quiet… But it’s all a balancing act where it’s important to consider how the sound will actually be perceived to the human ear at different sound levels.

For example, the ear is less sensitive to bass sounds at lower volumes, so if we increase the volume we can at the same time reduce the bass to make speech appear clearer. We do this with a feature called loudness. Another benefit of this is that less bass energy is transferred to the room. And that is a good thing because many rooms have problems with bass reverb.

With conference calls, we want even sound levels, and a broad frequency range. After all, the basic idea with teleconferencing is to simulate face-to-face meetings. So we try to create the feeling of being in the same room, just in front of the person we’re talking to.

During conference calls, we naturally don’t want to be hunched over the phone. Traditional speaker phones, were designed for a distance of 50 centimeters between the user and the device. Nowadays, teleconferences are held in large rooms as well and this means longer distances between users and devices. This is why the reference distance has been increased from half a meter to one and a half.

Since it’s equally important to hear as well as we did before, the volume must be doubled. In other words, we have to increase it by 10 decibels why it’s important that the conference phone at the receiving end has the power to handle this. 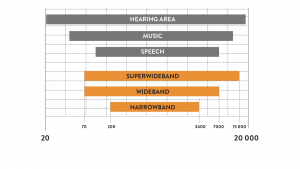 Another benefit of the development in communications technology is the transition from narrowband to wideband. This enables a significantly broader frequency range for the sound, which improves clarity and the sense of presence for conference calls.

Note: If not otherwise specified, are good article would Technologies original, reproduced please specify from http://www.meeteasy.com.hk/2017/02/28/sound-level-in-conference-call/.