Home > BLOG CENTER > The difference between Polycom and Meeteasy Speakerphone

The difference between Polycom and Meeteasy Speakerphone

What really interests me about the Polycom C100S is that it has echo cancellation; a feature that’s sorely inadequate in Skype itself.  Microsoft Windows Messenger for example would actually prevent any sound coming out of the sound card and speaker from entering back in to the audio stream.  No matter how loud of a sound I play from the computer whether it’s a blasting music or blasting opponents in Call of Duty 2, the person on the other side can’t hear any of it except what enters the Microphone that didn’t originate from the PC. 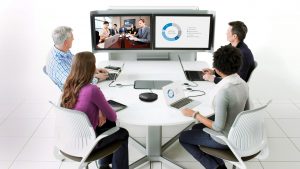 Echo is kept at a minimum with the Microsoft Windows Messenger and I would love to use it if it weren’t for the fact that it’s a hit and miss affair trying to connect with peers on Messenger.  Skype’s ability to connect anywhere behind any NAT or Firewall device has made it the fastest growing PC-to-PC calling software in the history of VoIP, but its echo cancellation algorithm is almost useless.  What I’m hoping is that the C100S will resolve this deficiency and make the Skype Speaker Phone experience more pleasant.

However, Meeteasy Bluetooth speaker is steadily growing more efficient and impressive, such as MVOICE series speakerphone, different from Polycom, the speaker is bigger than Polycom’s, and also has three microphone can be controlled separately. It is specially designed for PC based small-sized conference call, it is suitable for small to medium enterprises, home office professionals, on-line education teachers and students, and business travelers. This speakerphone can be connect to PC via USB, and to mobile phone via Bluetooth, instantly turn your PC or mobile phone to a conference all station anytime and anywhere. Suitable for personal or small group conference calls, echo cancellation eliminates acoustic echo, USB connection to PC for Web-conferencing, advanced DSP technology delivers remarkably rich, crystal-clear audio，3 high sensitive microphones provide 360° audio pickup over 2 meters，noise cancellation removes ambient room noise，Bluetooth built-in for conference calls via cell-phone，microphones can be controlled separately for specific situations.

What’s more, MVOICE series speakerphone is the best full duplex conference speakerphone. We based this conclusion on objective testing with speakerphone measurement equipment, subjective talking and listening tests conducted with multiple testers. In all, we compare more than 7 similar function models in the market, of those most famous brands, and tested the best of those, and the MVOICE came out on top because it had better performance to conduct bi-directional conversation than any other model we tested by far. The MVOICE even offers better noise cancelling. We heard each ends of the web-conferencing very clearly, real human voice, no distortion.

Note: If not otherwise specified, are good article would Technologies original, reproduced please specify from http://www.meeteasy.com.hk/2017/02/27/the-difference-between-polycom-and-meeteasy-speakerphone/.